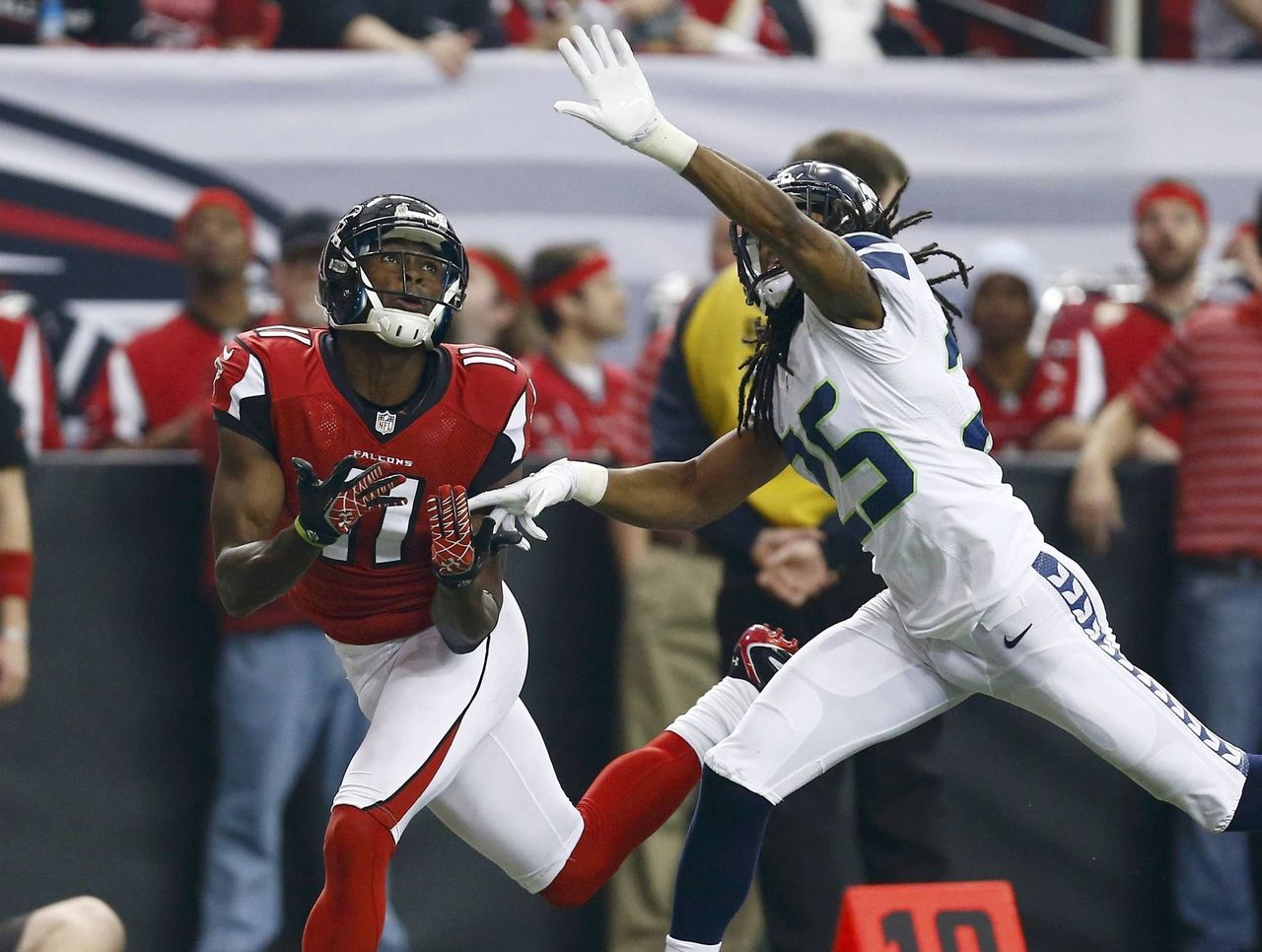 SEATTLE – As his career has progressed, Seattle’s Richard Sherman has become more adept at shadowing a specific wide receiver instead of concentrating on covering one side of the field.

He may have quite the challenge coming up Sunday: Atlanta’s Julio Jones, just two weeks removed from racking up 300 yards receiving against Carolina.

”I watch the wide receiver play in Julio, he’s one the very greatest football minds at his position. He has a real understanding of the game, the coverage, the leverage and that was one of the things when I first met Sherm,” said Atlanta head coach and former Seattle defensive coordinator Dan Quinn. ”I was so impressed with his football knowledge growing stronger through the years. That’ll be a classic matchup that we’re looking forward to being a part of.”

Yes, even the coaches are excited to see how this one plays out.

While it’s not certain Sherman will match up on Jones exclusively, there have been plenty of assumptions this week that that will be the case. And should they face off, there won’t be any acrimony. Jones and Sherman have become friends off the field after meeting at the Pro Bowl.

Once criticized for only playing left cornerback, Sherman has taken on more responsibility for following the opponent’s top wide receiver in recent seasons. Among those he’s chased around are Dez Bryant, Antonio Brown, Torrey Smith, A.J. Green and two weeks ago, Brandon Marshall.

Marshall got the better of Sherman in the first half of the Week 4 meeting between the Jets and Seahawks. But Sherman came out on top, with Seattle winning 27-17 and Sherman having his first two-interception game since the 2014 season.

Jones said he doesn’t know what to expect from the Seahawks.

”If that’s what they think is going to slow me down or give them the best chance at being successful, that’s what they’re going to do. I’m not their coach to decide that. It’s whatever they do,” Jones said. ”I’m not calling anyone out or anything; nor am I going to shy away from competition. I’m definitely going to compete every play, it doesn’t matter who’s guarding me.”

Two weeks ago, Jones posted one of the best games ever by an NFL receiver. He finished with 12 catches for exactly 300 yards in the win over Carolina, becoming the sixth player to have 300 or more yards receiving in a game. Jones averaged an astounding 25 yards per reception.

But he was quieted last week against Denver. The Broncos weren’t going to let Jones have another huge game, putting double coverage on him for most of the game and holding him to two catches for 29 yards.

The Seahawks are viewing that game against Denver as an anomaly.

”He’s been a great player for a long time,” Seattle coach Pete Carroll said. ”He came out as a great one. He’s just got marvelous talents, and he’s really fast when he gets going down field, and he’s a big playmaker and all that.”

Sherman’s shadowing of top wide receivers is also an acknowledgement of the versatility in Seattle’ secondary. DeShawn Shead and Jeremy Lane both have experience playing as nickel cornerbacks defending slot receives and playing on the outside. Their skills give Sherman the freedom to roam.

”It gets easier the more you do it. If you never dribble with your left hand and they ask you to dribble with your right, you’re not going to be great at dribbling with your left hand. But if they ask you to dribble both, you’ll be adept at it,” Sherman said. ”It’s been something that’s been fun for me. Whenever they ask me to do it, whenever the challenge presents itself or a team, it’s always their decision. It’s not like I get to pick or choose which games I do it.”