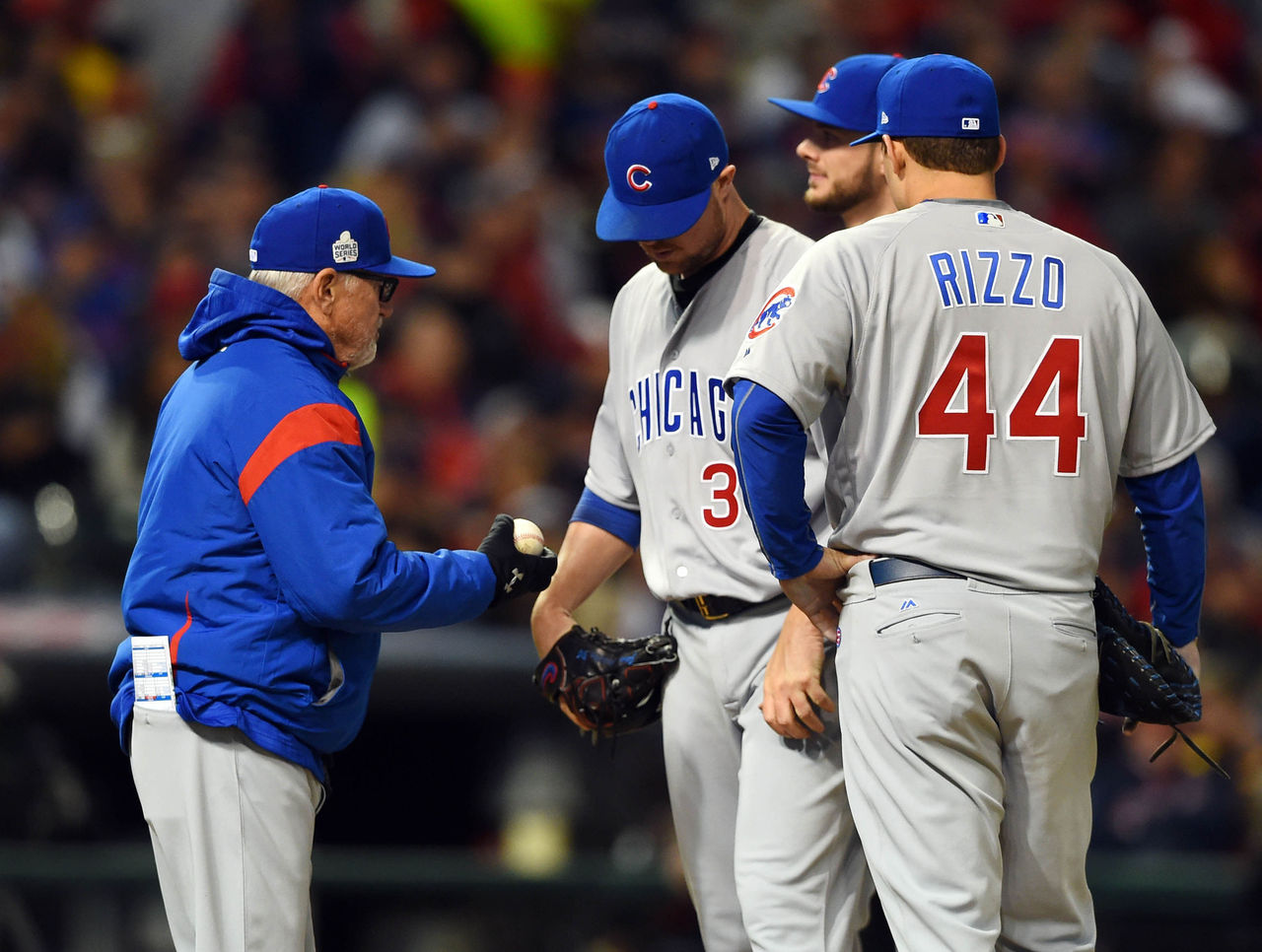 CLEVELAND – The Chicago Cubs lavished Jon Lester with a $155 million contract in the winter of 2014 precisely for moments like the one he faced Tuesday night.

On the road. Under the lights. In Game 1 of the World Series with a chance to take a massive step toward ending 108 years of franchise futility.

And for the first time on baseball’s biggest stage, Lester faltered. While his performance in Chicago’s 6-0 loss to the Indians was hardly a meltdown, the left-hander managed just 5 2/3 ordinary innings when something significantly more was required to keep up with Cleveland ace Corey Kluber.

”Jonny pitched – wasn’t on top of his game, but really gave us a chance to win,” Cubs manager Joe Maddon said.

The Indians didn’t so much knock Lester around while sending him to his first World Series setback in four starts so much as they took advantage of the limited opportunities he gave them during a shaky first inning. Cleveland opened a two-run lead that felt considerably larger the way Kluber was dealing.

Lester took the mound having allowed just one run in 21 innings in the World Series during a career that includes a pair of championship rings he earned with the Boston Red Sox. By the time he got the final out of the first, Cleveland had doubled that total.

Francisco Lindor singled and took a massive lead off first, knowing all about Lester’s inability to hold runners due to a tic that prevents him from making pickoff attempts with any kind of consistency or accuracy. At one point, Lester stepped off and Lindor found himself a good 25 feet off the bag. Yet rather than throw over, Lester stood and watched as Lindor scampered back to safety.

It was hardly the first time opposing runners have toyed with Lester. Yet it seemed to be one of the rare occasions when it rattled him. He walked Mike Napoli and Carlos Santana to load the bases, and Jose Ramirez’s swinging bunt brought Lindor home to stoke an already electrified crowd. When a 1-1 pitch ended up hitting Brandon Guyer on the leg, Chicago trailed 2-0.

Though Lester settled down – thanks in part to catcher David Ross throwing out Lindor trying to steal in the third – Lester again ran into trouble in the fourth when No. 9 batter Roberto Perez lined a solo shot that clanged off the railing above the wall in left field for the first of his two home runs.

Lester, who came in 2-0 with a 0.86 ERA during the 2016 playoffs, handed the ball to manager Joe Maddon with two outs in the sixth and trudged to the dugout after giving up three runs on six hits with three walks and seven strikeouts.

And when Perez clocked a three-run shot off reliever Hector Rondon in the eighth, the Cubs found themselves turning to Jake Arrieta for Game 2 on Wednesday night hoping to avoid heading back to Wrigley Field down 2-0 following a rare stumble by their ace who typically oozes October cool.