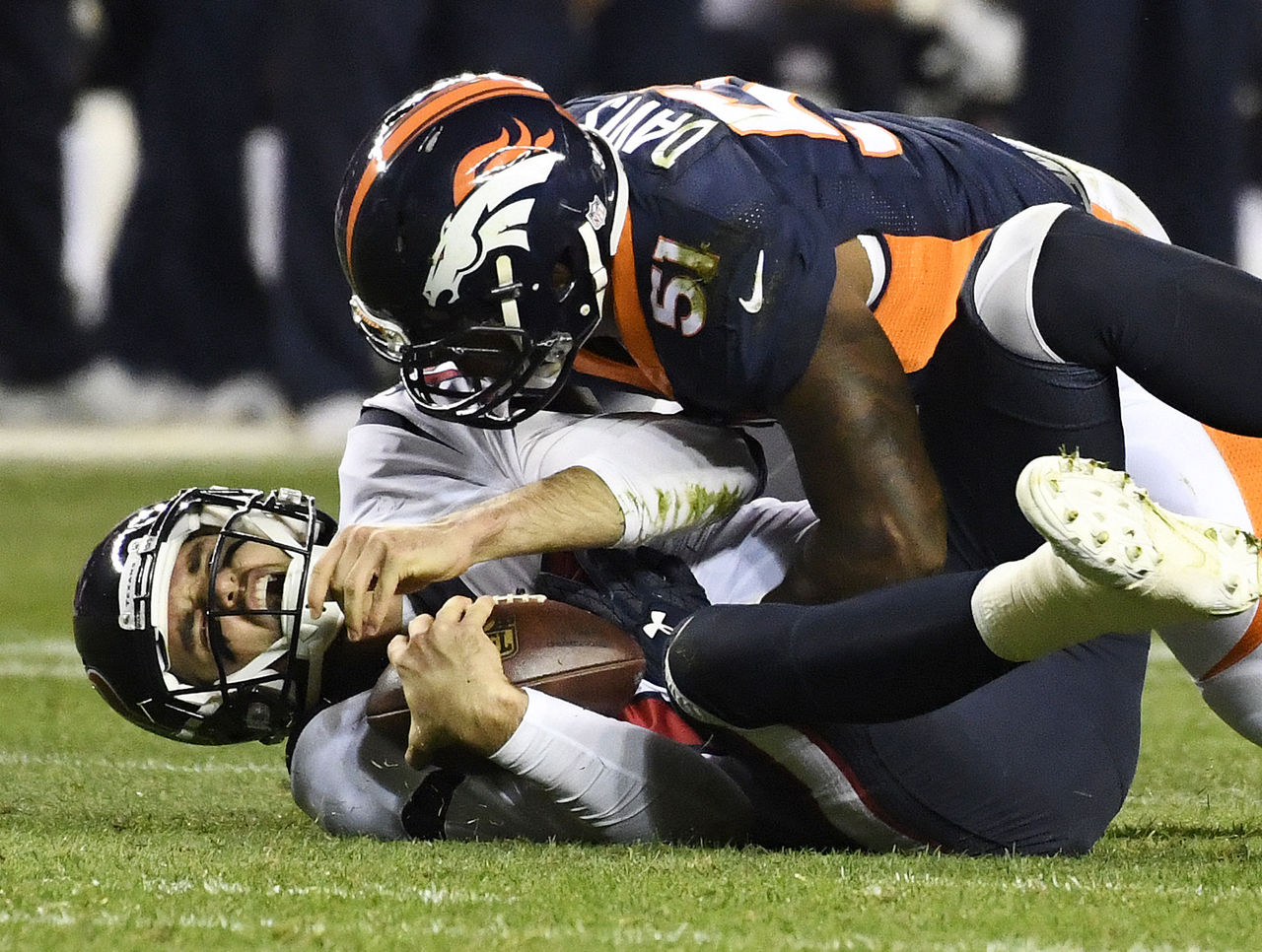 Coach Gary Kubiak returned to the sideline following his second health scare in three years, and he liked what he saw as the Broncos (5-2) snapped a two-game skid in sending the overwhelmed Texans home at 4-3.

C.J. Anderson and Devontae Booker energized Denver’s sputtering ground game, both running for a touchdown. Anderson gained 107 yards on 16 carries and Booker had 83 on 17 hand-offs.

But the big story was Trevor Siemian, Peyton Manning’s surprise successor, outplaying Osweiler, who was groomed to be Denver’s next QB but instead bolted to Houston in free agency, famously declaring the Texans gave him the better chance to be successful.

Not on this night.

Osweiler left for bigger numbers in Texas – both in his bank account and his stat sheet – but he spent the whole game quickly getting rid of the ball, constantly overthrowing DeAndre Hopkins in double coverage and otherwise running for his life from Von Miller & Co.

Osweiler also lost a fumble at his own 25-yard line. It was scooped up by Chris Harris Jr. on the first play of the fourth quarter and led to Brandon McManus’ chip-shot field goal that made it 24-9, all but snuffing out Houston’s hopes of a comeback.

”He’s a great kid. I talked to him after the game,” Kubiak said. ”I was concerned there late in the game because of what he did last week even though we had a two-score lead.”

Last week, Osweiler led Houston back from a late 14-point deficit for an overtime win against the Colts, but there was no comeback against this defense.

When it was over, Osweiler hugged Emmanuel Sanders and then Siemian at midfield.

”He’s into the game on every snap,” Texans coach Bill O’Brien said. ”He’s got good poise, tough environment. We all have to do better. Everyone has got to do better.”

Of the dozen passes thrown his way, Hopkins caught just five of them, covering 36 yards, and no other Texan gained more.

Anderson scored on a 7-yard run and Siemian hit Demaryius Thomas from 4 yards out as the Broncos took a 14-6 halftime lead.

Osweiler took a couple of big shots from safeties Darian Stewart and T.J. Ward in the first quarter, but the Texans led 6-0 on a pair of 43-yard field goals by Nick Novak.

Novak’s 29-yarder made it 14-9, but Stewart punched the ball from running back Alfred Blue’s grasp and linebacker Todd Davis plucked it out of the air . That led to Booker’s 1-yard TD run .

Kubiak missed Denver’s last game when doctors ordered him to take a week off after he was transported via ambulance to the hospital following Denver’s last home game, on Oct. 9, with a complex migraine condition, which can mimic a stroke. Kubiak had a mini-stroke in 2013 while coaching the Texans.

Like Osweiler, this was his first game against his former team, and cornerback Aqib Talib flipped the script and awarded Kubiak a game ball afterward.

”Coaches get game balls when players play good, I can tell you that,” Kubiak said. ”I’m proud of them because I asked them to do some things for me, kind of regroup ourselves a little bit and they did, they responded.”