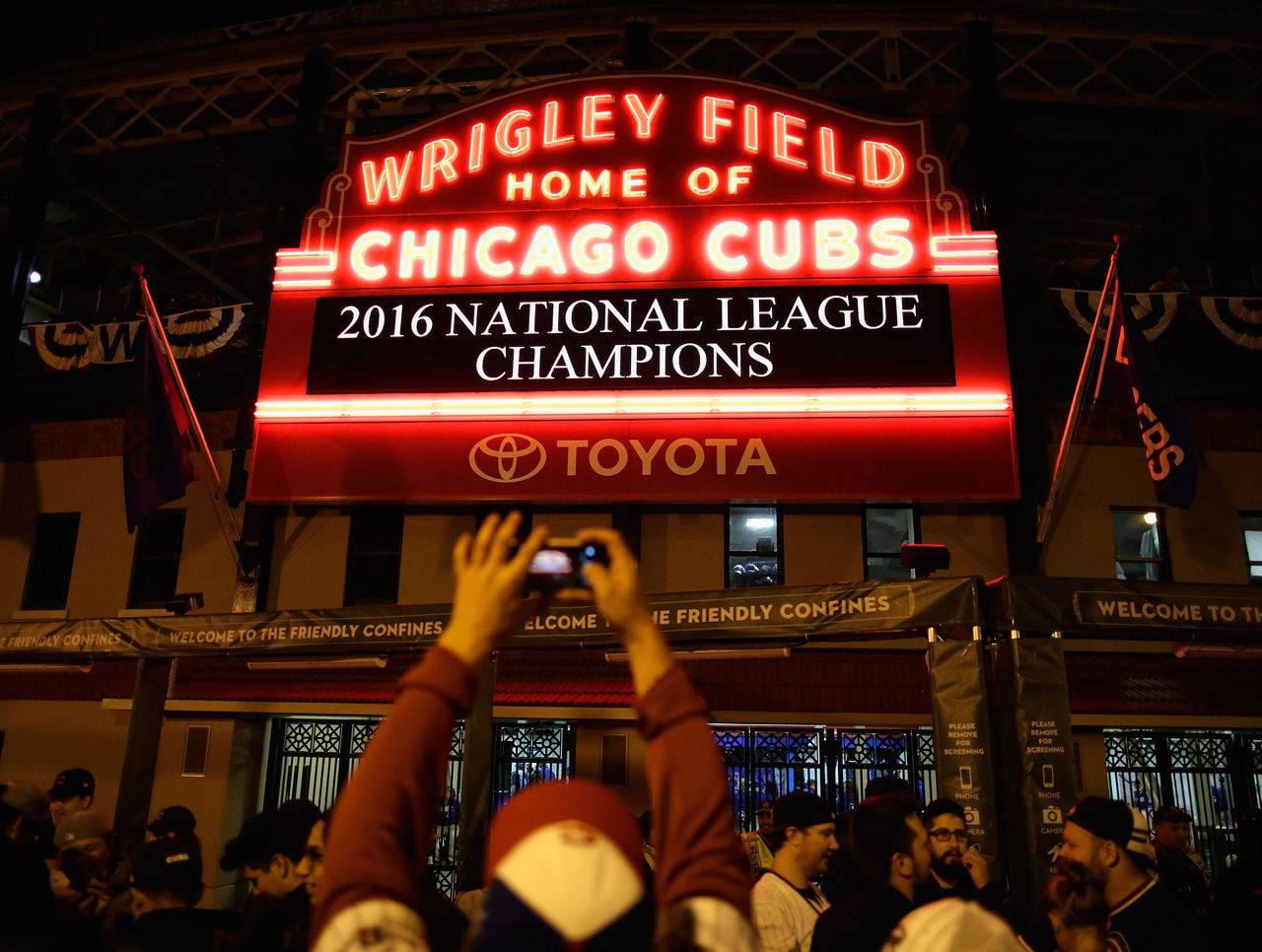 CHICAGO – A woman in a Chicago Cubs jersey climbed onto a man’s shoulders to pose for – what else? – a selfie in front of the cherry-red marquee at Wrigley Field, the second-oldest ballpark in the major leagues.

Not far away, red carnations lay at the foot of Harry Caray’s bronze statue and fans were sipping midday beers outside Murphy’s Bleachers, where a sign outside the pub declared: ”We’ve been preparing for today for 71 years. Cleveland’s in trouble.”

Not since Oct. 10, 1945, has a World Series game been played at Wrigley. The Cubs lost 9-3 to the Detroit Tigers that day 71 years ago, but that’s ancient history to fans now as the Fall Classic makes its long-awaited return to the ballpark nestled in a North Side neighborhood. As the Series shifts to Chicago this weekend knotted at a game apiece between the Cubs and Indians, it’s worth remembering that Wrigley lore has been shaped by change – and changes are plain to see again around here.

Here are some of the sights and sounds that make the 102-year-old ballpark a beloved landmark and a touchstone for baseball fans:

Built in 1914, Wrigley Field was first known as Weeghman Park and was home to the Chicago Federals, later called the Chicago Whales. The Cubs started playing there in 1916. Only Boston’s Fenway Park is older among major league ballparks.

Baseball historians still argue over what Babe Ruth was pointing at in Game 3 of the 1932 World Series before he hit his famous ”called shot” homer into Wrigley’s center field bleachers. It wasn’t the scoreboard. The original manual scoreboard , still in use today, went up in 1937.

It was the last ballpark to be illuminated for night games. The lights went on in 1988.

On Waveland Avenue, the ballhawks gather for batting practice and home games wearing gloves to catch a souvenir. They know a ball is coming by reading the crowd’s reaction. Bleacher expansion and a left field video board have limited the balls hit over the wall and into the street. But the ballhawks keep showing up to chase them.

Wrigley’s special character is showcased by the neighboring rooftops where fans can watch the game from bleachers erected to provide a glimpse of what’s going on inside the park.

The rooftop fun on game day belies the court battles over revenue-sharing agreements and views blocked by new video boards. Since the Ricketts family bought the Cubs in 2009, they’ve been buying up the properties and now control most of the 16 rooftop clubs.

When Cubs fans say, ”Holy Cow!” they’re quoting Hall of Fame broadcaster Harry Caray, who developed the phrase to make sure he didn’t utter expletives on the air. Starting in 1982, Caray led the crowd in ”Take Me Out to the Ball Game” during the seventh inning stretch. After Caray’s death in 1998, his widow, Dutchie Caray, led the song at the home opener in April. ”He was guiding me,” she said. The Cubs sometimes show video of Caray singing on new jumbo-sized video boards installed in 2015.

Chicago singer-songwriter Steve Goodman captured the dark side of what it means to be a Cubs fan in ”A Dying Cub Fan’s Last Request” in 1983. But with ”Go Cubs Go,” written in 1984 before he died of leukemia at age 36, he created a Cubs victory song with a chorus of: ”Go Cubs go, go Cubs go. Hey Chicago what do you say? The Cubs are gonna win today.”

The ”W” stands for ”Win.” Flown from the scoreboard flag pole, unfurled by Cubs fans in the stands, plastered on windows and hanging from Chicago porches, the W flag is now white with a blue letter. It didn’t start out that way.

The Wrigley family that owned the team also owned the Wilmington Transportation Co. Its logo was a blue flag with a white W. The tradition of flying a W flag for a win from the scoreboard pole started with that color combo. The flag would signal passengers on nearby elevated trains how the Cubs had done that day.

The current blue W on a white background began in the 1980s. Today, there’s also a hashtag – (hash)FlyTheW.