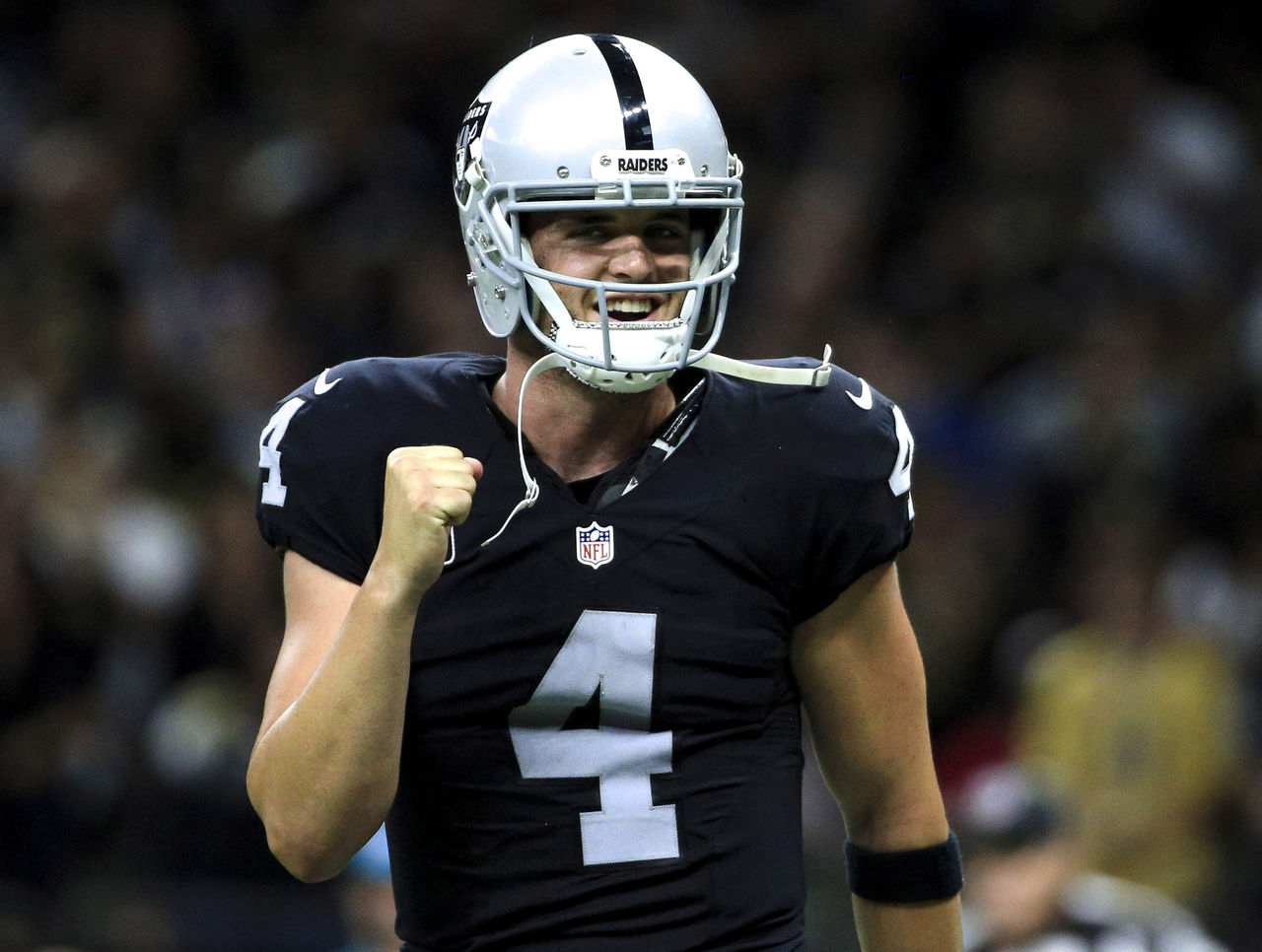 ALAMEDA, Calif. – Derek Carr hears all the talk of a possible MVP after a sterling first half to the season.

That comes with the territory, especially after winning AFC offensive player of the week and setting the franchise single-game record with 513 yards passing.

If Carr had it his way, he’d tune it all out.

He better get used to it if he puts together more games like the one he had last week in Tampa Bay when he threw the game-tying TD pass to Mychal Rivera with 1:38 left in regulation and the game-winner in overtime to Seth Roberts.

He broke Cotton Davidson’s franchise record of 427 yards passing in a game and joined Ben Roethlisberger and Y.A. Tittle as the only players to throw for at least 500 yards and four TDs in a game without an interception.

”That’s why it’s crazy to me,” he said. ”I still think of myself as a little kid, just a fan of the game. It’s still kind of surreal and I don’t think it will be real to me until I’m done playing and I can kind of look back. For now, I’m not going to look back. I have too much ahead of me. But, someday I’ll look back at it and it’s just one of those things, it’s like surreal. You can’t believe it. It’s like a video game. Your name’s up there but is it really yours? So far, it doesn’t mean anything, but I’m sure someday it will.”

The performance against the Bucs was indicative of how Carr has played for much of the first half of the season as he led comeback wins earlier against New Orleans and San Diego.

His numbers stack up well against the other top quarterbacks in the league like Matt Ryan and Drew Brees with 2,321 yards passing, 17 TDs and only three interceptions for a rating of 100.9.

”He’s had glimpses. He’s had little windows of greatness and he’s made a lot of plays,” Denver pass rusher Von Miller said. ”All the success that he’s having this season is really not a surprise to me. I’ve seen it. I’ve seen it in him. I’ve seen the type of quarterback that he can be.”

Carr will get one of his toughest tests yet Sunday night when the Super Bowl champion Broncos (6-2) bring their top-notch defense to Oakland to face the Raiders (6-2) in an AFC West showdown.

Putting together a top performance against a defense like Denver’s is the next step for Carr in his rapid progression from a shaky rookie season in 2014 to where he is now.

Carr has four interceptions and six TD passes in four career starts against Denver with the only win coming in a game in which he completed 12 of 29 passes for 135 yards last December.

”They’re one of the best defenses in the NFL, let alone this year, but for the last however many years, they’ve been one of the best we’ve ever seen in this league,” Carr said. ”They’re always a good challenge for us, but we’re definitely looking forward to it.”

This marks the second straight season Carr reached the halfway point with stellar numbers. He had a 104.3 rating through eight games last season with 19 touchdown passes, four interceptions and 7.7 yards per attempt. But he took a major step back in the second half when center Rodney Hudson and receiver Amari Cooper were slowed at times by injuries, posting a 79.2 rating in the final eight games.

But the Broncos see a much more polished passer in Carr’s third season.

”Anytime you see a guy throwing it as much as they’ve thrown it, and yet how well he’s protecting the football, and I think he’s only been sacked nine times, that tells you about his growth right there,” coach Gary Kubiak said. ”Understanding what’s going on and keeping his team in good positions, so very impressed. Obviously, Derek is playing as good as anybody in football right now.”