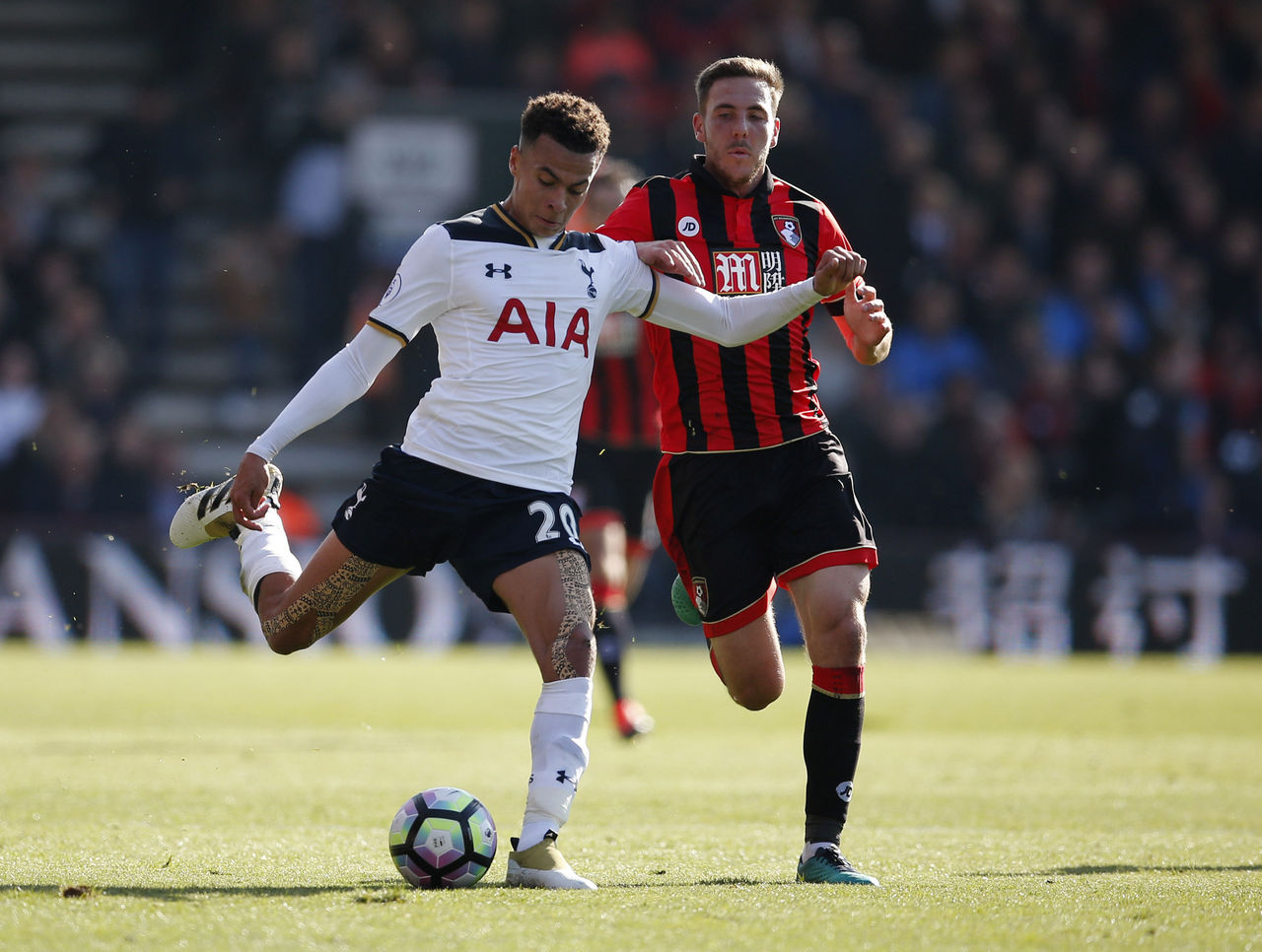 Bournemouth – Tottenham Hotspur had to settle for a third successive draw in a hard-fought but goalless encounter with Bournemouth at the Vitality Stadium on Saturday.

Overrun by Eddie Howe’s hard-running Bournemouth side in the opening stages, Tottenham battled its way back into the game and were in charge for most of the final hour.

But although both teams hit the woodwork, neither was able to muster enough shots on target to claim that it deserved all three points.

Mauricio Pochettino’s Tottenham will be content to have preserved its unbeaten Premier League record, although it spurned an opportunity to supplant leaders Manchester City.

Bournemouth looked as confident early on as would have been expected of a team who had beaten Hull City 6-1 at home in its previous match.

Tottenham, for its part, appeared weary after its mid-week 0-0 draw at Bayer Leverkusen in the Champions League and it almost fell behind inside six minutes.

Spurs failed to clear Jack Wilshere’s short corner and Charlie Daniels met Dan Gosling’s cross four yards out, but France goalkeeper Hugo Lloris got his knee in the way and deflected the ball onto the crossbar.

Tottenham tried to settle, but found it difficult as Bournemouth’s energy kept it at full stretch and it was not until the 17th minute that it went close.

Erik Lamela took a pass from Dele Alli and advanced to within 25 yards of goal before sending in a speculative shot that clipped the angle of post and crossbar with goalkeeper Artur Boruc unable to do more than spectate.

That seemed to give Spurs confidence and they began to find their rhythm, Lamela twisting past players and Christian Eriksen finding plenty of space.

In the 27th minute Boruc was forced into action, saving low to his left when Eriksen’s shot flicked off Harry Arter and looked likely to creep in at the near post.

Shortly after, Son Heung-Min set up Danny Rose on the corner of the six-yard area and the England left-back should have done better than hit the ball across goal.

Tottenham’s dominance meant that Bournemouth were struggling to make more chances, a header and a shot from Callum Wilson – both off target.

Spurs’ control of the game continued after the break.

Alli drew a full-length save from Boruc from 20 yards, then Eriksen’s flick in midfield sent Lamela through in a test of speed with two defenders, but he was unable to make quite enough space for a shot.

But if the visitors thought they could relax, Wilson reminded them otherwise with a quick turn and threatening low cross that was cleared only with difficulty.

Tottenham could have been considered fortunate that referee Craig Pawson saw no malice in an altercation between Arter and Moussa Sissoko, who appeared to catch his opponent with his elbow.

Pawson settled for lecturing the pair after players from both sides had joined in a heated confrontation.

The home fans bayed for a penalty when Max Gradel was challenged by Jan Vertonghen, but Pawson waved away less enthusiastic appeals from the Cherries players.

As the two sides went for a winner, there were chances at both ends. First Eriksen had a shot blocked by Adam Smith.

Then Gradel broke away on the left, but Mousa Dembele kept pace with the Bournemouth substitute before closing him down and forcing him wide.

The home side had another chance in added time when Simon Francis, the Bournemouth captain, made himself space on the right with a clever turn and sent a dangerous cross into the area.

But Benik Afobe, having worked himself clear of defenders, could only nod the ball over the bar.